A Recipe for a Cold Day

January 04, 2017
Its cold outside. Not just a little cold, like it dropped below zero and will not be going much higher for quite sometime, COLD.

Soup weather? I think so.

The hubs is not much of one for soups, unless they are a thick, hearty stew, that you can pretty much eat with a fork. So this is a soup I make for myself.

I waited until every, single child, husband, attention demanding, creature in this house was in bed. Then I stayed up and made this for myself.

It's what I do to unwind.

Then I leave all the dishes in the sink to wind me up again the next day... but I digress.

I hesitate to post recipes, because I am not a rule follower. I use what I have, I use what sounds good. I rarely measure. And soup is perfect for this kind of cooking.

So be daring, be brave, take this recipe as a starting point and jump.

Here's a quick walk through of my version of an easy French Onion Soup with bacon!

In a large pot fry up some bacon, always a good place to start. I made this for one person, add more for each additional person you will be cooking for.

Then remove the bacon, save some grease and throw in a bunch of onions thinly sliced, not diced.

Cook the onions on low-med heat, add some butter, add some dried rosemary, throw in some salt and pepper. When the onions start getting really soft, and smelling really good, throw in some minced garlic (from a jar is fine, we are not food snobs here) a little goes a long way. The slower and longer you can go with the onions, the better. If you are in a hurry, turn up the heat a little and go faster, it'll all be ok.

Pour liquid into the pot. Use what you have. I had chick bouillon cubes that I added to some water, added a little worcestershire sauce and the last of a dry red wine sitting on the counter. But if I'd had beef stock, I would have used that instead.

Let the onions and broth simmer as long as you've got, at least long enough to come to a good simmer.

I cubed up some old bread threw it in a pan with some butter and salted it generously and tossed it around in the pan till it was toasted.

Put the soup in a bowl, top with toasted bread cubes (otherwise known as croutons), add some cheese, (if you want to throw it in the oven to melt the cheese, even better, I was in a hurry and hungry) and finally sprinkle on the crumbled bacon.

It's such a great soup for a cold night. It feels like home. It tastes like comfort.

Here is an approximate recipe for those rule followers out there.

Half an onion, thinly sliced (Red is good, but white or yellow is fine! I like to combine different kinds.)

While it simmers add bread to separate pan with melted butter and toast them. 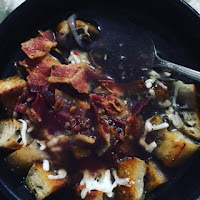