One of my favorite blogs is having a Pintrest Challenge. They do it a couple times a year and its just a fun time to challenge everyone to complete a project they've pinned on Pintrest.

I've been wanting to get in on the action, but never found the time. Oh yeah and a little thing called, I don't do Pintrest.

It's not because I'm not interested or I don't think I'll like it. I'm terrified of it!

I already spend too much time perusing my favorite house app and a bunch of blogs I follow, and Facebook. If I added something as captivating as Pintrest, my house and kids may just go completely uncared for.

So in the spirit of playing along with the Pintrest challenge I thought I'd share our headboard that I made a couple years back, loooong before I started blogging. 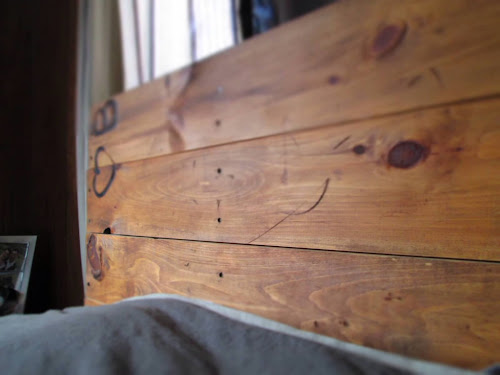 It is by far one of the projects I am most proud of!

Almost three years ago, the hubs and I got a new bed, a giant sized, California King! It came with a frame, but no headboard. We had already spent enough money on the bed, I didn't want to have to buy a headboard as well.

So I ripped apart an old crate that we had sitting around on the ranch. Literally, I took a hand saw and a hammer and took the pieces that I wanted.

I sanded and stained the wood. Then I joined the two sides together to form one long piece and attached legs made out of some extra pieces from the crate.

I love the character of the wood, the scars and the knots. 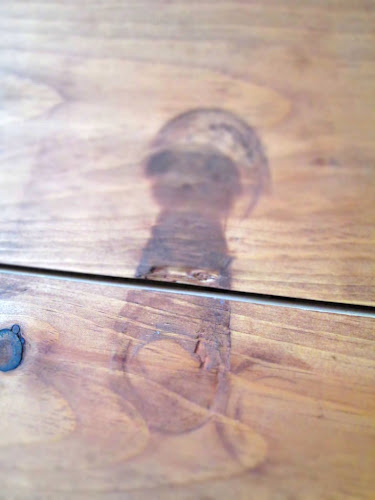 This mark is from a piece of metal that had been lying on the crate so long its shape was ingrained in the wood!

My favorite part is the brand in the top corners. That is my husbands cattle brand and I love it. 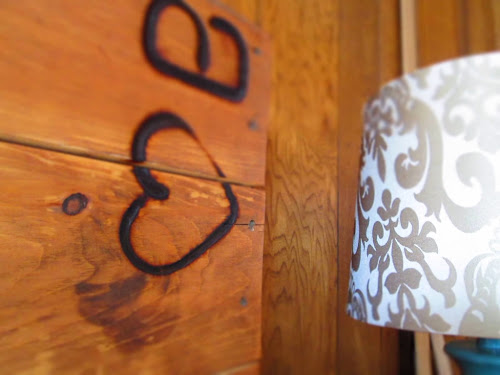 I actually took the hot branding iron and applied it straight to the wood. I figured it was just like having a really big wood burning kit.

My only advice here is, don't be lazy and do it in the porch, because it dark and cold and you don't want to go outside; the whole house will smell like smoke! 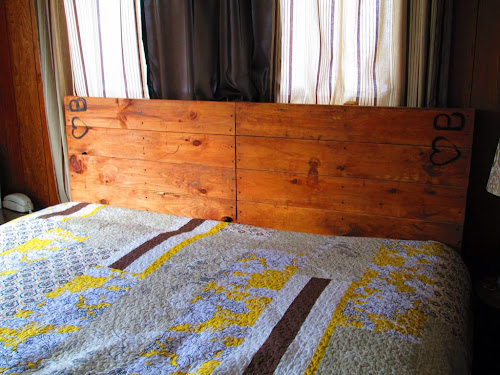 (I wish this picture was better, but nap time was over so there were babies calling my name!)

I propped the headboard against the wall behind the bed and there it is. It isn't actually attached to the bed, so it only works against a wall, but we don't have room to float a bed in the middle of the room anyways!

That's pretty much it!

I know there are a million Images on Pintrest and the web of repurposed crates and pallets, so I'm hoping this one counts as an almost Pintrest project!

What crafts have you been up to lately? Spring is around the corner and I feel the shift to get outside and spend more time on projects out there coming on!

Linking up with Funky Junk Interiors!