When the Going Gets Tough...

So far in the remodel, we have had very few surprises or setbacks. Sure, there's been a couple little things, like the kitchen floors taking more work than expected and there's been the usual waiting for a sub-contractor here and there. Small things.

Today I went to Lucky and discovered that the new door is defective and had warped around the glass and wind was blowing in. The frame was covered in frost and since temps here today were around negative ten without wind chill, it wasn't a great time for a north door to give out.

Then I found out that the garage doors cost nearly double what I had budgeted for. Since we got a really large door so the Hubs can fit his feed truck in, it was more expensive than I had expected.

We recently decided to rip down the drop ceilings on the second story because most were dropping and it would clean things up a lot to get the dirt and mouse poo out of the drop ceiling. Well today we found out that we had to remove the plaster and lath that was under the drop ceiling on the angled part of the ceiling because there was no insulation left there. This meant that the entire day that I had previously spent priming the angled ceiling was now a waste and the whole thing got ripped out.

Are you with me so far? Things up until this point, had not gone my way today.

So now the ceiling was the wrong color and finish. And there wasn't enough paint left for the walls. To make matters worse, I had bought name brand paint for the first time, and let me tell you that ain't cheap!

Well, I decided the world wouldn't end and I would just switch the wall color and ceiling colors. Oh boy, things have to get better right?

I opened paint that had originally been destined for the ceiling color, it was suppose to be a slightly grey white. Yep, it was wrong. It was actually a very yellow white, which was confirmed by reading the label, white, yellow and gold had been added to the mix.

I am an hours drive away from the store where I had the paints mixed. It is not a quick fix.

I had a choice, fight with the paint guys over he said, she said, or suck it up and deal with it.

I reminded myself that this is a first world problem. I am getting the house of my dreams and a little off colored paint is not a big deal in the scope of real problems in the world.

So with one coat of paint on, I went upstairs to help the carpenters finish shoveling out ninety years of dirt and grime that had rained down from the angled part of the ceiling. We also ripped out the old carpet when we were all finished.

We were covered in soot and dirt and I had paint all over my hair and face, but a lot of work got done today. Tomorrow will be a new day and since this is the year for patience, I guess I will have to take a deep breath and put things into perspective.

I had planned to write about all this, and be witty and coy and slightly tongue-in-cheek (tongue- and-cheek?) but alas, it seems I am too bitter and a little resentful. I am not yet far enough removed for witty. :)

Season four of Downton Abbey aired last night and I have it waiting on DVR. So I am going to go mourn the loss of Matthew along with Lady Mary.

Maybe tomorrow I will be witty and coy. 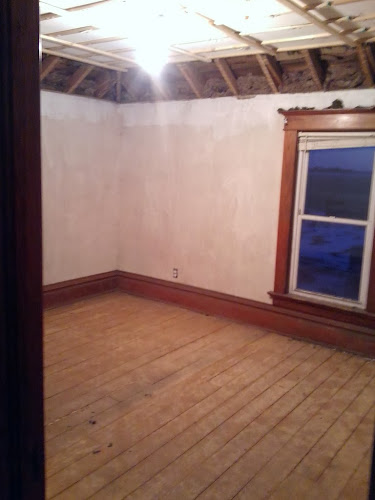 P.S. Here's a picture of an upstairs bedroom with the ceiling down and carpet gone! See that line of white at the top of the wall, that's the real color of the wall. The brown from there down is dirt on the wall! Guess I'm going to need some soap and water!