October 20, 2012
I was outside with the kiddos the other day, following a huge wind storm. We were picking up fallen branches, and I got to thinking some of them would work really well for a project I had in mind.

The twig got pushed aside for a couple of days and then I'm watching the Today show and lo and behold, Ms. Martha Stewart had the same stinkin' idea. Ok, it wasn't like it was rocket science, but just for the record I had it first! 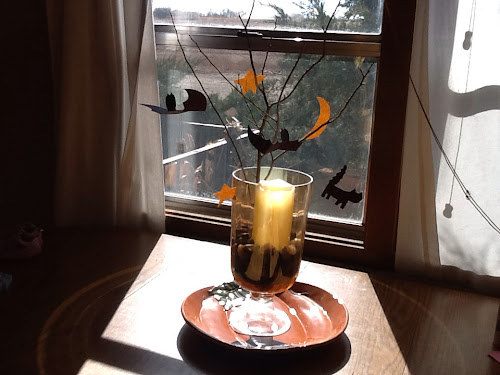 It's pretty simple and straightforward but I like it. I took a hurricane lamp and filled it with rock filler. I placed a battery operated candle inside and placed the twig behind it. Now, Ms. Martha spray painted her twig black, which would be a nice touch. I'm just not patient enough, plus I kind of like the natural look, so in the twig went.
Next I cut out various shapes from construction paper. Bats, stars, moon, cats, you get the idea. Then my daughter got in on the action and we too black thread and threaded it through holes we made in the paper using a safety pin.


Then we just tied them to the branches. Like I said, not rocket science, but it was fun and my little one was really proud of it!

Have you been up to any last minute Halloween projects? Only eleven more days to go! Enjoy your weekend.

P.S. Hocus Pocus is on TV tonight. A family favorite around here!