My phone started ringing at 7:30 this morning. I was totally still asleep and so were the babes.

I answered the phone, forcing that perky-I-wasn't-sleeping voice.

It was my house mover.

He wants to move the house next Thursday. As in, one week from today. 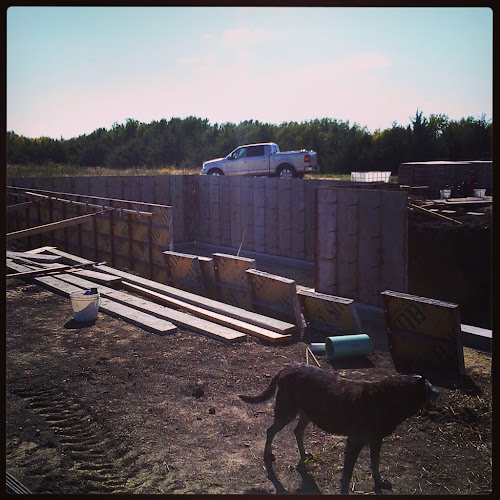 Those are not walls my friends, those are only half of the wall forms that need to be up in order to pour the concrete for the walls.

Can't really move the house in without those, now can we?

The house mover needs to do it now, or he can't get back till the end of October. Our house has to be moved by the first week in October so the neighbors can move their new one in.

I called all my subcontractors and they can get their work done in time, but it all hinges on the concrete.

Funny, when we started this, it hinged on the house mover not being late and now he wants to go a week early. That's unheard of in construction. A week late, yes, a month late, sure, but a week early? Never!

My concrete guy is doing everything he can but he only has so much time and so much man power. There are only so many hours in a day and he has already gone above and beyond to try to fit this into a schedule that was tight before the week earlier bump.

Right now I am just waiting to hear how this is going to play out.

I really do not want to have to set this house down on a temporary block until we can make the final move to the basement. I also don't want to rush this and make a major mistake. The concrete is the foundation of my house and if it's rushed and a mistake is made, it could be disasterous.